I just had some time to procrastinate away, so I built a little open source graph pastebin web application called Instagraph. It’s based on GraphViz, PHP, MySQL and Apache. At least the first three need to be installed on your web server, and the fourth one is necessary unless you tweak your way around using the included .htaccess file (which makes use of mod_rewrite).

I’ve been wanting to write something like this for ages. Often enough I want to explain concepts in IRC and find myself struggling to present all the relationships between different things in an understandable way. Now I can just use a private Instagraph instance to make a nice picture that will speak a thousand words for me. Awesome.

Instagraph is woefully underdocumented but shouldn’t be too hard to set up. It’s also extremely simple and has no user interface to speak of.

Now, if you understand GraphViz’s dot syntax, you can turn this: 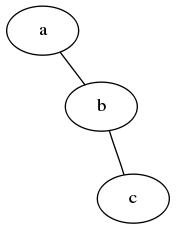 You can get Instagraph at https://github.com/jast/instagraph where you will find a download button as well as the Git repository URL.